"Massage" with Currents of High Frequency

I trust that the present brief communication will not be interpreted as an effort on my part to put myself on record as a “patent medicine” man, for a serious worker cannot despise anything more than the misuse and abuse of electricity which we have frequent occasion to witness. My remarks are elicited by the lively interest which prominent medical practitioners evince at every real advance in electrical investigation. The progress in recent years has been so great that every electrician and electrical engineer is confident that electricity will become the means of accomplishing many things that have been heretofore, with our existing knowledge, deemed impossible. No wonder then that progressive physicians also should expect to find in it a powerful tool and help in new curative processes. Since I had the honor to bring before the American Institute of Electrical Engineers some results in utilizing alternating currents of high tension, I have received many letters from noted physicians inquiring as to the physical effects of such currents of high frequency. It may be remembered that I then demonstrated that a body perfectly well insulated in air can be heated by simply connecting it with a source of rapidly alternating high potential. The heating in this case is due in all probability to the bombardment of the body by air, or possibly by some other medium, which is molecular or atomic in construction, and the presence of which has so far escaped our analysis — for according to my ideas, the true ether radiation with such frequencies as even a few millions per second must be very small. This body may be a good conductor or it may be a very poor conductor of electricity with little change in the result. The human body is, in such a case, a fine conductor, and if a person insulated in a room, or no matter where, is brought into contact with such a source of rapidly alternating high potential, the skin is heated by bombardment. It is a mere question of the dimensions and character of the apparatus to produce any degree of heating desired.

It has occurred to me whether, with such apparatus properly prepared, it would not be possible for a skilled physician, to find in it a means for the effective treatment of various types of disease. The heating will, of course, be superficial, that is, on the skin, and would result, whether the person operated on were in bed or walking around a room, whether dressed in thick clothes or whether reduced to nakedness. In fact, to put it broadly, it is conceivable that a person entirely nude at the North Pole might keep himself comfortably warm in this manner.

Without vouching for all the results, which must, of course, be determined by experience and observation, I can at least warrant the fact that heating would occur by the use of this method of subjecting the human body to bombardment by alternating currents of high potential and frequency such as I have long worked with. It is only reasonable to expect that some of the novel effects will be wholly different from those obtainable with the old familiar therapeutic methods generally used. Whether they would all be beneficial or not remains to be proved. 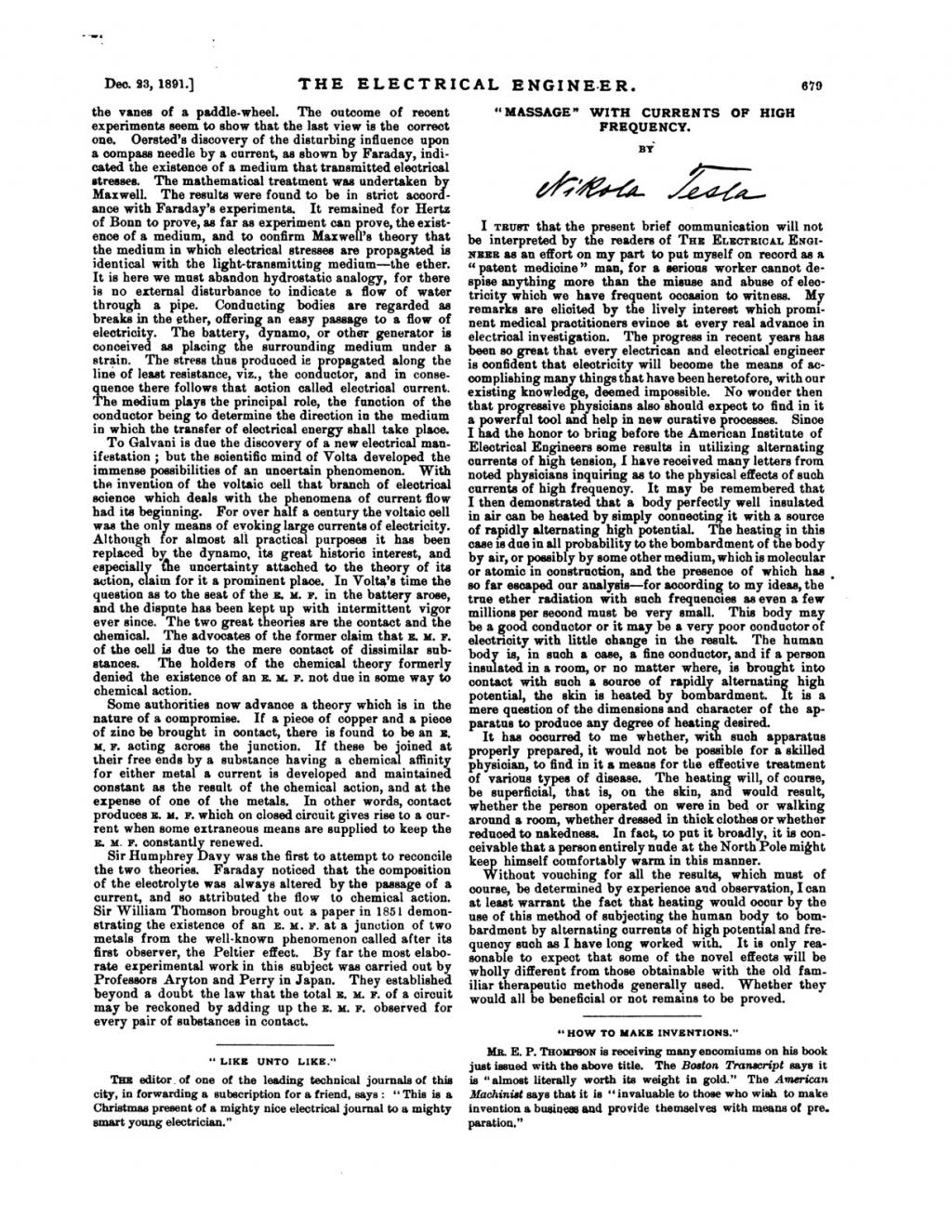