To the Editor of The Electrical World:

SIR: About a year ago I had the pleasure of bringing before the American Institute of Electrical Engineers the results of some of my work on alternate current motors. They were received with the interest which novel ideas never fail to excite in scientific circles, and elicited considerable comment. With truly American generosity, for which, on my part, I am ever thankful, a great deal of praise through the columns of your esteemed paper and other journals has been bestowed upon the originator of the idea, in itself insignificant. At that time it was impossible for me to bring before the Institute other results in the same line of thought. Moreover, I did not think it probable — considering the novelty of the idea — that anybody else would be likely to pursue work in the same direction. By one of the most curious coincidences, however, Professor Ferraris not only came independently to the same theoretical results, but in a manner identical almost to the smallest detail. Far from being disappointed at being prevented from calling the discovery of the principle exclusively my own, I have been excessively pleased to see my views, which I had formed and carried out long before, confirmed by this eminent man, to whom I consider myself happy to be related in spirit, and toward whom, ever since the knowledge of the facts has reached me, I have entertained feelings of the most sincere sympathy and esteem. In his able essay Prof. Ferraris omitted to mention various other ways of accomplishing similar results, some of which have later been indicated by O. B. Shallenberger, who some time before the publication of the results obtained by Prof. Ferraris and myself had utilized the principle in the construction of his now well known alternate current meter, and at a still later period by Prof. Elihu Thomson and Mr. M. J. Wightman.

Since the original publications, for obvious reasons, little has been made known in regard to the further progress of the invention; nevertheless the work of perfecting has been carried on indefatigably with all the intelligent help and means which a corporation almost unlimited in its resources could command, and marked progress has been made in every direction. It is therefore not surprising that many unacquainted with this fact, in expressing their views as to the results obtained, have grossly erred.

In your issue of May 4 I find a communication from the electricians of Ganz & Co., of Budapest, relating to certain results observed in recent experiments with a novel form of alternate current motor. I would have nothing to say in regard to this communication unless it were to sincerely congratulate these gentlemen on any good results which they may have obtained, but for the article, seemingly inspired by them, which appeared in the London Electrical Review of April 26, wherein certain erroneous views are indorsed and some radically false assertions made, which, though they may be quite unintentional, are such as to create prejudice and affect material interests.

As to the results presented, they not only do not show anything extraordinary, but are, in fact, considerably below some figures obtained with my motors a long time ago. The main stress being laid upon the proposition between the apparent and real energy supplied, or perhaps more directly, upon the ratio of the energy apparently supplied to, and the real energy developed by, the motor, I will here submit, with your permission, to your readers, the results respectively arrived at by these gentlemen and myself.

If we compare these figures we will find that the most favorable ratio in Ganz & Co’s motor is 0.761, whereas in the Westinghouse, for about the same load, it is 0.836, while in other instances, as may be seen, it is still more favorable. Notwithstanding this, the conditions of the test were not such as to warrant the best possible results.

The factors upon which the apparent energy is mainly dependent could have been better determined by a proper construction of the motor and observance of certain conditions. In fact, with such a motor a current regulation may be obtained which, for all practical purposes, is as good as that of the direct current motors, and the only disadvantage, if it be one, is that when the motor is running without load the apparent energy cannot be reduced quite as low as might be desirable. For instance, in the case of this motor the smallest amount of apparent energy was about 3,000 watts, which is certainly not very much for a machine capable of developing 90 h. p. of work; besides, the amount could have been reduced very likely to 2,000 watts or less.

On the other hand, these motors possess the beautiful feature of maintaining an absolutely constant speed no matter how the load may vary. This feature may be illustrated best by the following experiment performed with this motor. The motor was run empty, and a load of about 200 h.p., far exceeding the normal load, was thrown on suddenly. Both armatures of the motor and generator were seen to stop for an instant, the belts slipping over the pulleys, whereupon both came up to the normal speed with the full load, not having been thrown out of synchronism. The experiment could be repeated any number of times. In some cases, the driving power being sufficient, I have been enabled to throw on a load exceeding 8 to 9 times that which the motor was designed to carry, without affecting the speed in the least.

This will be easily understood from the manner in which the current regulation is effected. Assuming the motor to be running without any load, the poles of the armature and field have a certain relative position which is that of the highest self-induction or counter electromotive force. If load be thrown on, the poles are made to recede; the self-induction or counter electromotive force is thereby diminished and more current passed trough the stationary or movable armature-coils. This regulation is very different from that of a direct current motor. In the latter the current is varied by the motor losing a certain number of revolutions in proportion to the load, and the regulation would be impossible if the speed would be maintained constant; here the whole regulation is practically effected during a fraction of one revolution only. From this it is also apparent that it is a practical impossibility to throw such a motor out of synchronism, as the whole work must be done in an instant, it being evident that if the load is not sufficient to make a motor lose a fraction of the first revolution it will not be able to do so in the succeeding revolutions. As to the efficiency of these motors, it is perfectly practicable to obtain 94 to 95 percent.

The results above given were obtained on a three-wire system. The same motor has been started and operated on two wires in a variety of ways, and although it was not capable of performing quite as much work as on three wires, up to about 60 h.p. it gave results practically the same as those above-mentioned. In fairness to the electricians of Ganz & Co., I must state here that the speed of this motor was higher than that used in their experiments, it being about 1,500. I cannot make due allowance for this difference, as the diameter of the armature and other particulars of the Ganz & Co. motor were not given.

The motor tested had a weight of about 5,000 lbs. From this it will be seen that the performance even on two wires was quite equal to that of the best direct current motors. The motor being of a synchronous type, it might be implied that it was not capable of starting. On the contrary, however, it had a considerable torque on the start and was capable of starting under fair load.

In the article above referred to the assertion is made that the weight of such alternate current motor, for a given capacity, is “several times” larger than that of a direct current motor. In answer to this I will state here that we have motors which with a weight of about 850 pounds develop 10 h.p. with an efficiency of very nearly 90 percent, and the spectacle of a direct current motor weighing, say 200 – 300 pounds and performing the same work, would be very gratifying for me to behold. The motor which I have just mentioned had no commutator or brushes of any kind nor did it require any direct current.

Finally, in order to refute various assertions made at random, principally in the foreign papers, I will take the liberty of calling to the attention of the critics the fact that since the discovery of the principle several types of motors have been perfected and of entirely different characteristics, each suited for a special kind of work, so that while one may be preferable on account of its ideal simplicity, another might be more efficient. It is evidently impossible to unite all imaginable advantages in one form, and it is equally unfair and unreasonable to judge all different forms according to a common standard. Which form of the existing motors is best, time will show; but even in the present state of the art we are enabled to satisfy any possible demand in practice. 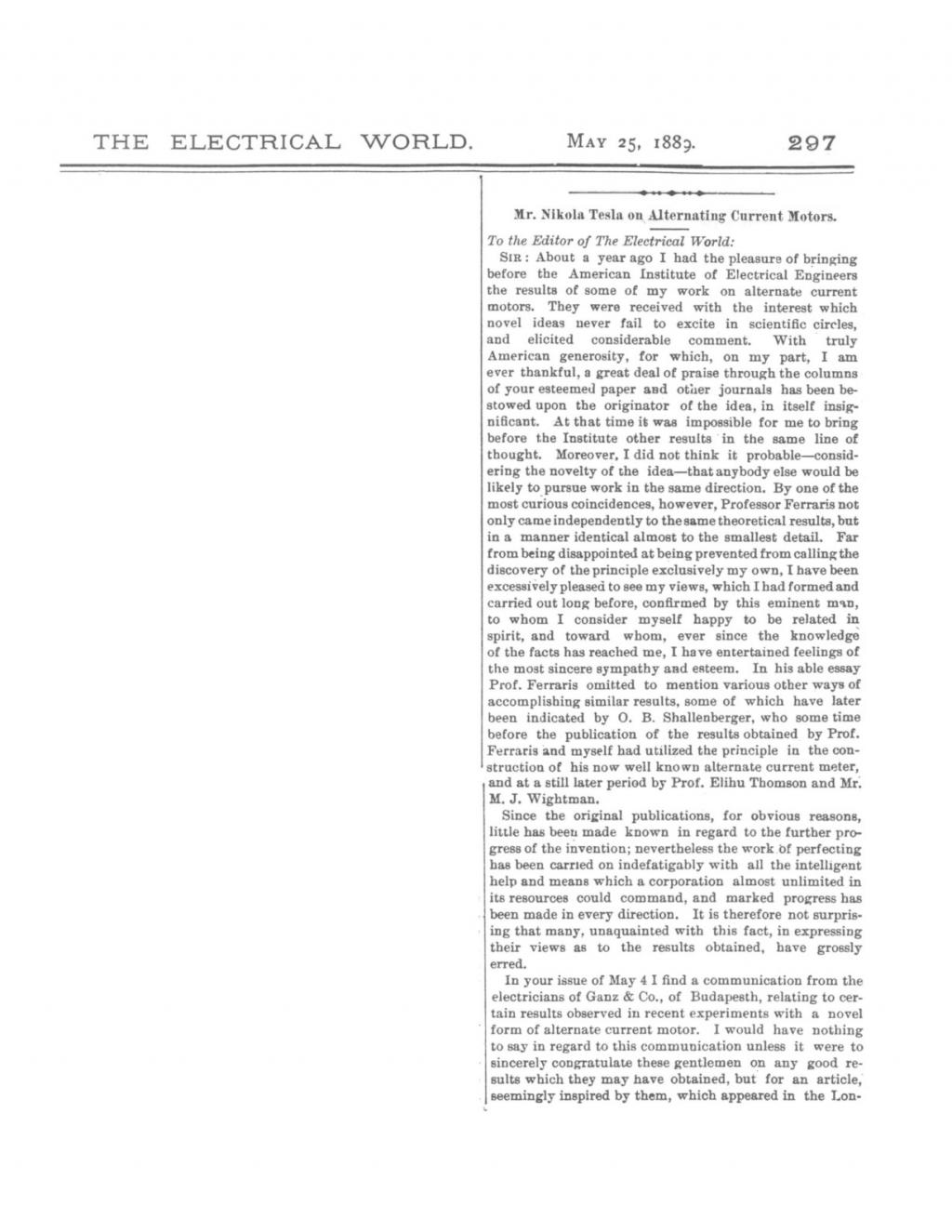