To the Editor of The Tribune:

Sir: In so far as wireless art is concerned there is a vast difference between the great inventor Thomas A. Edison and myself, integrally in my favor. Mr. Edison knows little of the theory and practice of electrical vibrations; I have, in this special field, probably more experience than any of my contemporaries. That you are not as yet able to impart your wisdom by wireless telephone to some subscriber in any other part of the world, however remote, and that the presses of your valuable paper are not operated by wireless power is largely due to your own effort and those of some of your distinguished confreres of this city, and to the efficient assistance you have received from my celebrated colleagues, Thomas A. Edison and Michael I. Pupin, assistant consulting wireless engineers. But it was all welcome to me. Difficulty develops resource.

The transmission across the Atlantic was not made by any device of Mr. Marconi’s, but by my system of wireless transmission of energy, and I have already given notice by cable to my friend Sir James DeWar and the royal institution of this fact. I shall also request some eminent man of science to take careful note of the whole apparatus, its mode of operation, dimensions, linear and electrical, all constants and qualitative performance, so as to make possible its exact reproduction and repetition of the experiments. This request is entirely impersonal. I am a citizen of the United States, and I know that the time will come when my busy fellow citizens, too absorbed in commercial pursuits to think of posterity, will honor my memory. A measurement of the time interval taken in the passage of the signal necessary to the full and positive demonstration will show that the current crosses the ocean with a mean speed of 625,000 miles a second.

The Marconi plants are inefficient, and do not lend themselves to the practice of two discoveries of mine, the “art of individualization,” that makes the message non-interfering and non-interferable, and the “stationary waves,” which annihilate distance absolutely and make the whole earth equivalent to a conductor devoid of resistance. Were it not for this deficiency, the number of words per minute could be increased at will by “individualizing.”

You have already commented upon this advance in terms which have caused me no small astonishment, in view of your normal attitude. The underlying principle is to combine a number of vibrations, preferably slightly displaced, to reduce further the danger of interference, active and passive, and to make the operation of the receiver dependent on the co-operative effect of a number of attuned elements. Just to illustrate what can be done, suppose that only four vibrations were isolated on each transmitter. Let those on one side be respectively a, b, c, and d. Then the following individualized lines would be ab, ac, ad, bc, bd, cd, abc, abd, acd, bed and abed. The same article on the other side will give eleven similar combinations, and both together twenty-two lines, which can be simultaneously operated. To transmit one thousand words a minute, only forty-six words on each combination are necessary. If the plants were suitable, not ten years, as Edison thinks, but ten hours would be necessary to put this improvement into practice. To do this Marconi would have to reconstruct the plants, and it will then be observed that the indefatigable Italian has departed from universal engineering customs for the fourth time. 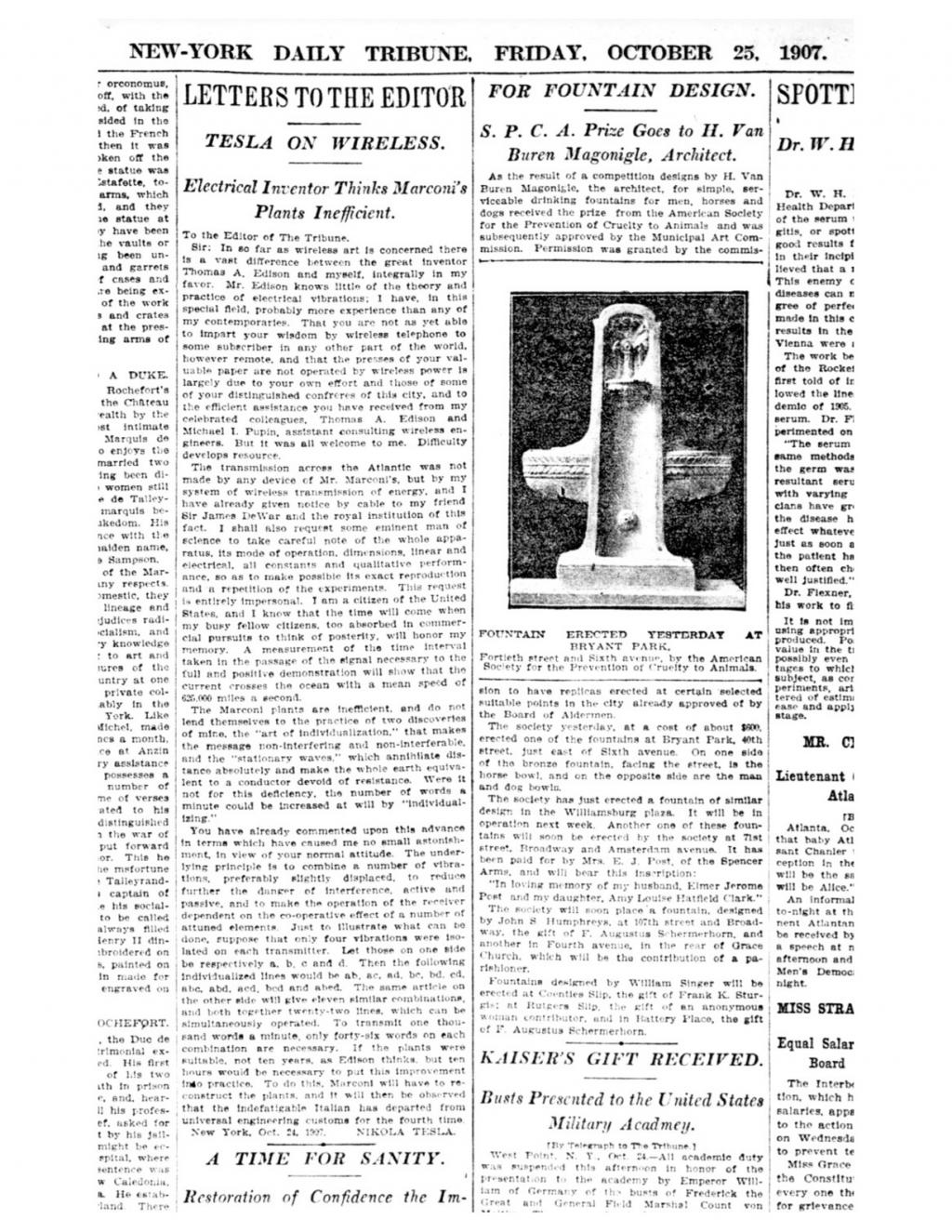