It is not an extravagant statement to say that never before in the history of the world has there been a scientific discovery about which centered such magnificent dreams as are being built up on certain recently discovered electrical principles. Among these the foremost place, according to the Springfield Republican, must be given to the astounding discoveries of the young Servian genius, Nikola Tesla, which are so novel and so extraordinary that the most imaginative of inventors are unable to foresee what form their development will take. Just as experimenters were beginning to think that they knew all that could be learned about electricity, and that further improvement must be in the line of more perfect mechanical application. Mr. Tesla shows us the electric fluid under conditions in which it differs from ordinary electricity as much as light differs from heat. A current of two thousand volts will kill a man in the twinkling of an eye, but this modern wizard lets currents pour through his hands with a potential of two hundred thousand volts, vibrating a million times a second and showering from him in dazzling streams of light.

The wildest dream of the inventor could not have foreseen that while currents of low frequency are deadly, these are harmless. Mr. Tesla says that he will soon be able to wrap himself in a complete sheet of electric fire that will keep a man warm at the north pole without harming him. Neither Merlin nor Michael Scott nor any of the wizards of old ever wrought a more potent miracle, even in fancy. The meaning of this is too far beyond us to be realized at present. We can no more grasp its significance than Franklin could discern the electric motor in his captured thunderbolt. Equally astounding and with more visible usefulness is Mr. Tesla’s discovery that currents of such enormous potential and frequency can be transmitted without the use of wires. A room can be filled with electricity from copper plates in ceiling and floor, so that electric lamps will burn without any connecting wire as soon as they are brought in. In the same way intelligence and power may be transmitted without a circuit, doing away with the necessity for trolleys, storage batteries and subways. When it is considered that such startling changes as this are already theoretically possible, it will be seen that in the inventions upon which we so complacently congratulate ourselves we have only timidly paddled along the shore of the great sea yet to be explored. 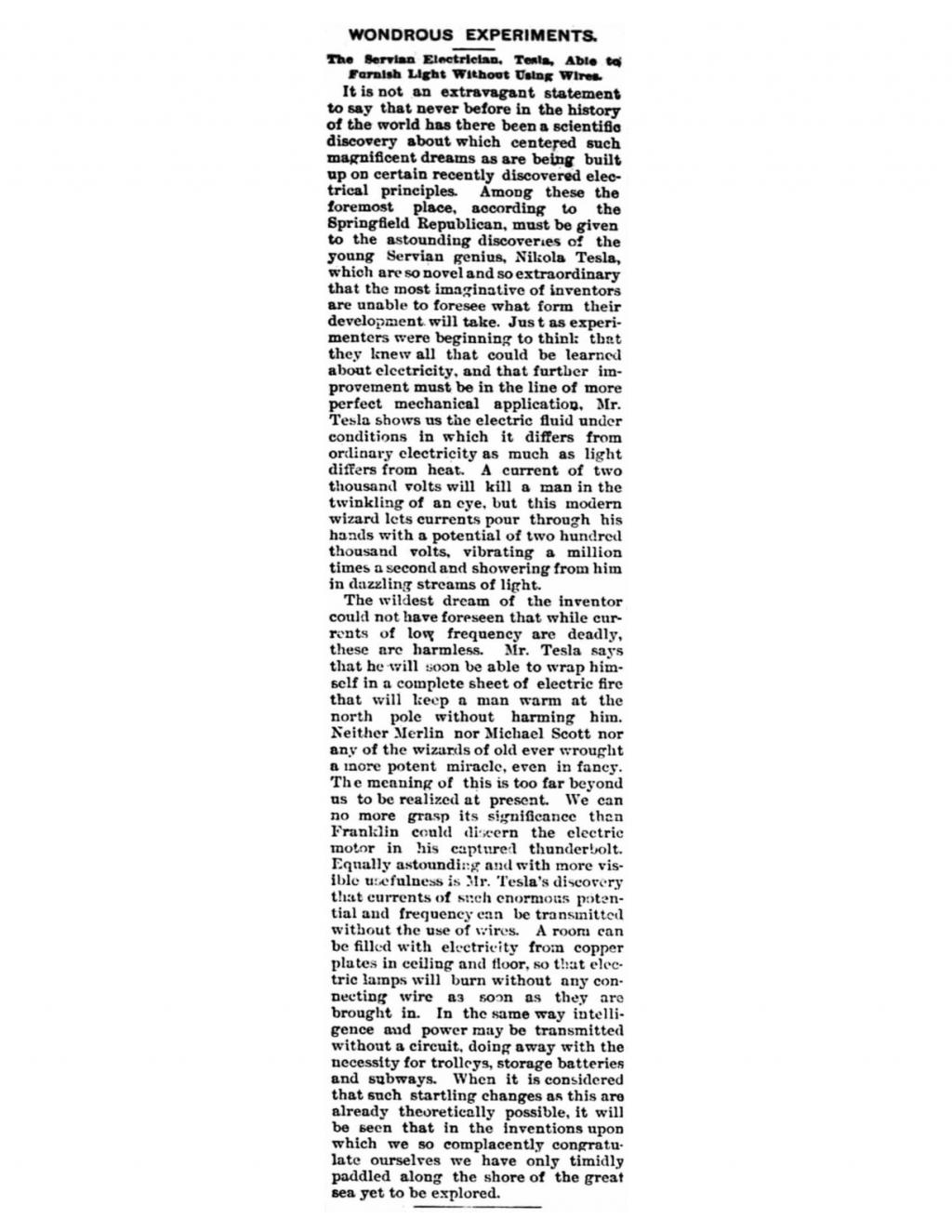