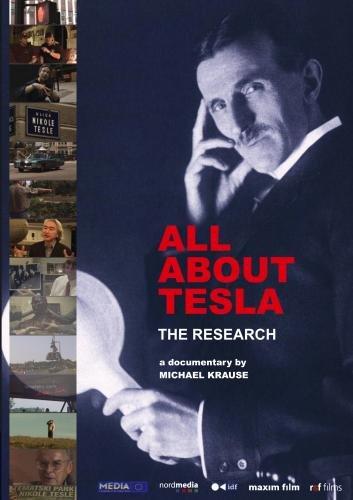 All About Tesla - The Research

Today, it is necessary to find new energy resources. Fossil fuels will run out soon and they have to be replaced. To the present day, nobody knows by what. 100 years ago, Nikola Tesla worked on the forefront to answer this question. Tesla saw the ‘ambient medium’ as the energy source of our future. He wanted to tap into this ‘eternal source of energy of the Universe’.

Nikola Tesla’s vision of free energy is a concept for the 21st century. Modern science has discovered that more than 70 percent of the Universe is dark energy. Can we tap into it? Tesla said: yes, we can.

In ALL ABOUT TESLA – THE RESEARCH director Michael Krause visits important places in Nikola Tesla's life, he meets with busy researchers and adamant fans. Exclusive interviews with scientists, politicians and other personalities of today reflect the inspiring influence of Nikola Tesla on their research. The film shows how the memory of Tesla survived and how it was kept alive. What do people do with Tesla’s inventions, ideas and visions today?

Tesla’s 150th anniversary was celebrated in 2006. The city of Niagara Falls, Canada, commissioned a monument to Nikola Tesla. The sculpture was unveiled in July 2006. The film follows the creative process of building the bronze Tesla statue by artist Les Drysdale. During the film, Tesla’s birthplace Smiljan, Croatia, was turned into the “Tematski Park Nikola Tesla”. This transformation marks the growing interest in Nikola Tesla, the most underrated genius of the technological era.

I became interested in Nikola Tesla 20 years ago. A friend of mine had written a novel, in which Tesla played an important part. I wrote the script for a feature film with all the ingredients this fascinating character offered: a genius with tremendous success, and a downfall. Happily this film was never made.

After a long time working in the film industry I wanted to become a filmmaker again. I had worked on documentaries, and I sat down with my producer. There was a question in the room: what should the film be about? From the far end of my brain a name took shape: Nikola Tesla. There he was, the character I would spend the next four years with.

It became clear that Tesla is BIG. If you google Tesla, you get more than 14 million hits. What do you do with all this information? I decided to concentrate on one question: who is doing what now (with Tesla)? I went on a research tour to meet all these people. I found the most marvellous, friendly and focussed people you can imagine. Interest in Tesla was common sense.

I met people who know a lot about the state of this planet and the things they told and demonstrated make you scared. It is a wonderful world we live in, but we have this really big problem: energy. During my research I have witnessed some phenomena, which, if the technology could be realized, would be things to hope for.

Tesla envisioned a peaceful world with abundant energy, without wars and the need for it. He was a true visionary, and his most interesting vision was to tap into the eternal source of energy of the Universe. Today, this is called dark energy. This energy is there, we just can’t see it.

Tesla was a master of energy. I think he really felt some of the most fundamental forces. We all do. It’s all energy and we sometimes, if we’re lucky, feel it. My idea was to make people aware of Tesla’s ideas. Maybe they can help us out of the upcoming energy crisis. ALL ABOUT TESLA – THE RESEARCH became an experience of a lifetime. It’s a nice piece in time; it documents my quite adventurous and astonishing research.