Be it known that I, NIKOLA TESLA, a citizen of the United States, residing at New York, in the county and State of New York, have invented certain new and useful Improvements in Fluid Propulsion, of which the following is a full, clear, and exact description.

In the practical application of mechanical power based on the use of a fluid as the vehicle of energy, it has been demonstrated that, in order to attain the highest economy, the changes in velocity and direction of the movement of the fluid should be as gradual as possible. In the present forms of such apparatus more or less sudden changes, shocks and vibrations are unavoidable. Besides, the employment of the usual devices for imparting energy to a fluid, as pistons, paddles, vanes and blades, necessarily introduces numerous defects and limitations and adds to the complication, cost of production and maintenance of the machine.

The object of my present invention is to overcome these deficiencies in apparatus designed for the propulsion of fluids and to effect thereby the transmission and transformation of mechanical energy through the agency of fluids in a more perfect manner, and by means simpler and more economical than those heretofore employed. I accomplish this by causing the propelled fluid to move in natural paths or stream lines of least resistance, free from constraint and disturbance such as occasioned by vanes or kindred devices, and to change its velocity and direction of movement by imperceptible degrees, thus avoiding the losses due to sudden variations while the fluid is receiving energy.

It is well known that a fluid possesses, among others, two salient properties: adhesion and viscosity. Owing to these a body propelled through such a medium encounters a peculiar impediment known as “lateral” or “skin resistance”, which is twofold; one arising from the shock of the fluid against the asperities of the solid substance, the other from internal forces opposing molecular separation. As an inevitable consequence, a certain amount of the fluid is dragged along by the moving body. Conversely, if the body be placed in a fluid in motion, for the same reasons, it is impelled in the direction of movement. These effects, in themselves, are of daily observation, but I believe that I am the first to apply them in a practical and economical manner for imparting energy to or deriving it from a fluid.

The subject of this application is an invention pertaining to the art of imparting energy to fluids, and I shall now proceed to describe its nature and principles of construction of the apparatus which I have devised for carrying it out by reference to the accompanying drawings which illustrate an operative and efficient embodiment of the same.

Figure 1 is a partial end view, and Fig. 2 is a vertical cross section of a pump or compressor constructed and adapted to be operated in accordance with my invention.

In these drawings the device illustrated contains a runner composed of a plurality of flat rigid disks 1 of a suitable diameter, keyed to a shaft 2, and held in position by threaded nut 3, a shoulder 4 and washers 5, of the requisite thickness. Each disk has a number of central openings 6, the solid portions between which form spokes 7, preferably curved, as shown, for the purpose of reducing the loss of energy due to the impact of the fluid. The runner is mounted in a two part volute casing 8, having stuffing boxes 9, and inlets 10 leading to its central portion. In addition a gradually widening and rounding outlet 11 is provided, formed with a flange for connection to a pipe as usual. The casing 8 rests upon a base 12, shown only in part, and supporting the bearings for the shaft 2, which, being of ordinary construction, are omitted from the drawings.

An understanding of the principle embodied in this device will be gained from the following description of its mode of operation. Power being applied to the shaft and the runner set in rotation in the direction of the solid arrow the fluid by reason of its properties of adherence and viscosity, upon entering through the inlets 10 and coming in contact with the disks 1 is taken hold of by the same and subjected to two forces, one acting tangentially in the direction of rotation, and the other radially outward. The combined effect of these tangential and centrifugal forces is to propel the fluid with continuously increasing velocity in a spiral path until it reaches the outlet 11 from which it is ejected. This spiral movement, free and undisturbed and essentially dependent on the properties of the fluid, permitting it to adjust itself to natural paths or stream lines and to changes its velocity and direction by insensible degrees, is characteristic of this method of propulsion and advantageous in its application. While traversing the chamber enclosing the runner, the particles of the fluid may complete one or more turns, or but a part of one turn. In any given case their path can be closely calculated and graphically represented, but fairly accurate estimate of turns can be obtained simply by determining the number of revolutions required to renew the fluid passing through the chamber and multiplying it by the ratio between the mean speed of the fluid and that of the disks. I have found that the quantity of fluid propelled in this manner is, other conditions being equal, approximately proportionate to the active surface of the runner and to its effective speed. For this reason, the performance of such machine augments at an exceedingly high rate with the increase of their size and speed of revolution.

The dimensions of the device as a whole, and the spacing of the disks in any given machine will be determined by the conditions and requirements of special cases. It may be stated that the intervening distance should be the greater, the larger the diameter of the disks, the longer the spiral path of the fluid and the greater its viscosity. In general, the spacing should be such that the entire mass of the fluid, before leaving the runner, is accelerated to a nearly uniform velocity, not much below that of the periphery of the disks under normal working conditions and almost equal to it when the outlet is closed and the particles move in concentric circles. It may also be pointed out that such a pump can be made without openings and spokes in the runner, as by using one or more solid disks, each in its own casing, in which form the machine will be eminently adapted for sewage, dredging and the like, when the water is charged with foreign bodies and spokes or vanes especially objectionable.

Another application of this principle which I have discovered to be not only feasible, but thoroughly practicable and efficient, is the utilization of machines such as above described for the compression or rarefaction of air, or gases in general. In such cases it will be found that most of the general considerations obtaining in the case of liquids, properly interpreted, hold true. When, irrespective of the character of the fluid, considerable pressures are desired, staging or compounding may be resorted to in the usual way the individual runners being, preferably, mounted on the same shaft. It should be added that the same end may be attained with one single runner by suitable deflection of the fluid through rotative or stationary passages.

The principles underlying the invention are capable of embodiment also in that field of mechanical engineering which is concerned in the use of fluids as motive agents, for while in some respects the actions in the latter case are directly opposite to those met with in the propulsion of fluids, the fundamental laws applicable in the two cases are the same. In other words, the operation above described is reversible, for if water or air under pressure be admitted to the opening 11 the runner is set in rotation in the direction of the dotted arrow by reason of the peculiar properties of the fluid which traveling in a spiral path and with continuously diminishing velocity, reaches the orifices 6 and 10 through which it is discharged.

When apparatus of the general character above described is employed for the transmission of power, however, certain departures from structural similarity between transmitter and receiver may be necessary for securing the best result. I have, therefore, included that part of my invention which is directly applicable to the use of fluids as motive agents in a separate application filed January 17, 1911, Serial No. 603,049. It may be here pointed out, however, as is evident from the above considerations, that when transmitting power from one shaft to another by such machines, any desired ratio between the speeds of rotation may be obtained by proper selection of the diameter of the disks, or by suitably staging the transmitter, the receiver, or both. But it may be stated that in one respect, at least, the two machines are essentially different. In the pump, the radial or static pressure, due to centrifugal force, is added to the tangential or dynamic, thus increasing the effective head and assisting in the expulsion of the fluid. In the motor, on the contrary, the first named pressure, being opposed to that of supply, reduces the effective head and velocity of radial flow toward the center. Again, in the propelled machine a great torque is always desirable, this calling for an increased number of disks and smaller distance of separation, while in the propelling machine, for numerous economic reasons, the rotary effort should be the smallest and the speed the greatest practicable. Many other considerations, which will naturally suggest themselves, may affect the design and construction, but the preceding is thought to contain all necessary information in this regard.

It will be understood that the principles of construction and operation above set forth, are capable of embodiment in machines of the most widely different forms, and adapted for the greatest variety of purposes. In the above, I have sought to describe and explain only the general and typical applications of the principle which I believe I am the first to realize and turn to useful account.

I do not claim in this application the method herein described of imparting energy to a fluid, having made this discovery the subject of a copending application Serial No. 735,914.

What I claim is:

1. A machine for propelling or imparting energy to fluids comprising in combination a plurality of spaced disks rotatably mounted and having plane surfaces, and enclosing casing, ports of inlet at the central portion of said casing and through which the fluid is adapted to be introduced to the axial portions of the disks, and ports of outlet at the peripheral portion of the casing through which the fluid, when the machine is driven by power, is adapted to be expelled, as set forth.

2. A machine for propelling or imparting energy to fluids, comprising in combination a volute casing provided with ports of inlet and outlet at its central and peripheral portions, respectively, and a runner mounted within the casing and composed of spaced disks with plane surfaces having openings adjacent to the axis of rotation.

3. A rotary pump, comprising in combination a plurality of spaced disks with plane surfaces mounted on a rotatable shaft and provided with openings adjacent thereto, a volute casing enclosing the said disks, means for admitting a fluid into that portion of the casing which contains the shaft and an outlet extending tangentially from the peripheral portion of said casing.

In testimony whereof I affix my signature in the presence of two subscribing witnesses. 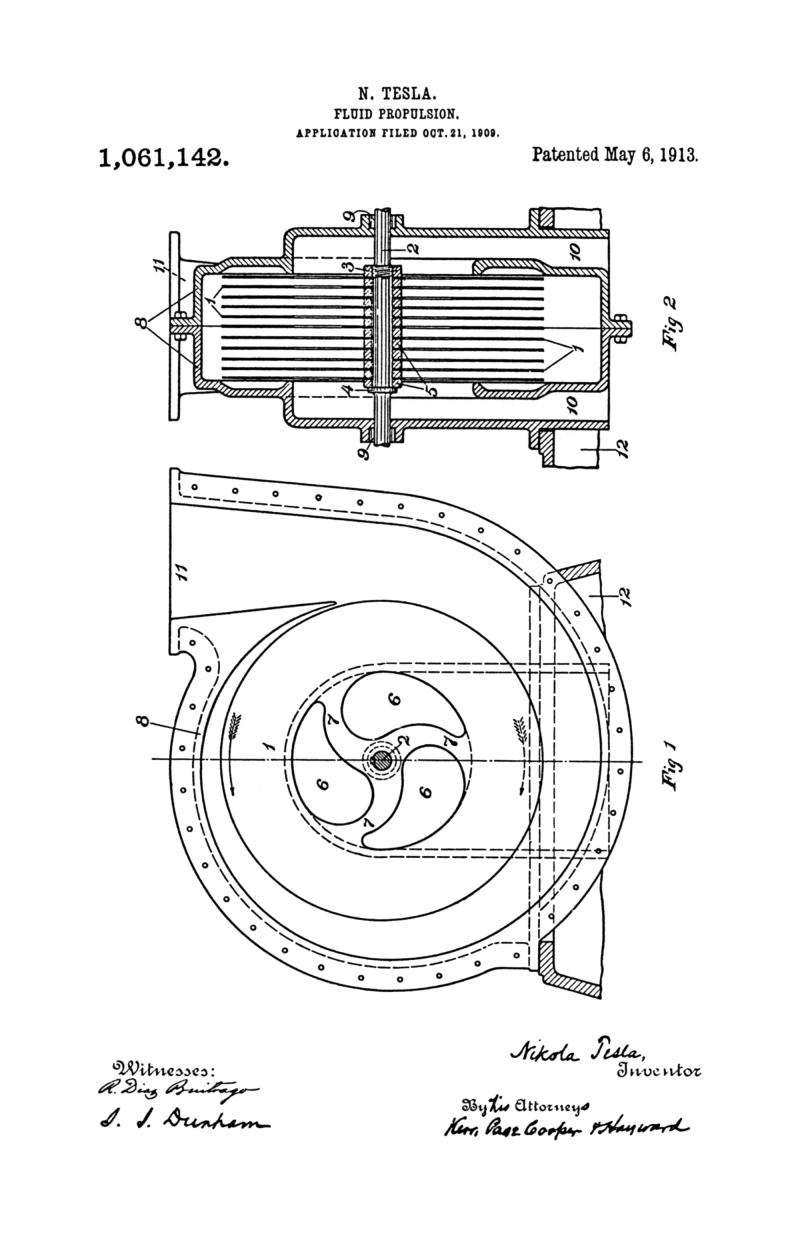