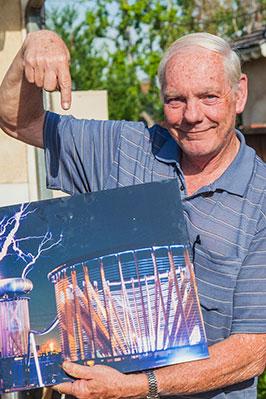 Bill leaves behind a legacy as one of the pioneers of modern Tesla coil design and construction. His coils have been featured in movies and TV shows since the late 1970s and are still in use today. One of Bill's greatest contributions to Tesla coil building was the use of large or oversized top-loads called "toroids" which greatly improved performance. Prior to this, most coil designs used small spheres or doorknobs as top-loads. Bill was mentored by, and was close friends with, the late Kenneth Strickfaden, who is widely recognized as the original master of high-voltage special effects.

I first met Bill at a Tesla conference on Long Island back in 2006. He and I had been corresponding via email for years regarding Tesla and Tesla coil building. I considered Bill a kindred spirit because like me, he was a Tesla historian and wanted to see Tesla receive the credit he deserved. I had the honor of visiting Bill at his home in California back in 2010. He and his wife Francis were gracious and made me feel very welcome. I felt, and still feel, very privileged to have been invited to his home and to call him a friend.

Bill, from myself and the entire Tesla coil community, know that we're grateful for your efforts and that you will be missed.