Tesla, 76, Reports His Talents at Peak

Says His New Invention, Almost Done, Will Come as “100,000 Trumpets of Apocalypse.”

Nikola Tesla, dean of American inventors, either was 76 years old yesterday or will be today (he does not know which because he was born on the stroke of midnight), and in a self-deprecatory interview last night at a midtown hotel, where he lives, he told a little of his activities of the last year and his hopes for the future.

He expects that future to be long and productive, because it is no uncommon thing for the countrymen of his birthplace, Smiljan, in the mountains of Czechoslovakia, to live to 110 or 120, and he believes that he has more energy and alertness than ever before in his life.

“I have had a very successful year,” he said with the enthusiasm of one a third his years. “I have made two inventions, among the most important of my life.

“When they are announced, one will be like the 100,000 trumpets of the Apocalypse. The other will be less sensational, but it, too, will be important. It will be like the shout with which Joseph's army brought down the walls of Jericho.

“I am elated. The practical success of these inventions is almost achieved. I hope to be able to make them known within the next year.”

Dr. Tesla would not disclose the nature of these inventions in detail. He intimated that the more important of them had to do with molecular physics and that it would be of the utmost benefit to the steel industry.

“When applied in certain ways,” he said, “it will yield greatly improved products and obviate much waste.”

The other invention would result in a saving of energy, he said. It had nothing to do, he explained, with the problem on which he has long been working — the tapping of a tremendous and thus far unused source of energy. He has been working on that during the last year, he said, and has made great advances both in its practical application and in the theory underlying it. As to this new source of power, he said:

“When the time is ripe I propose first to announce the scientific principles underlying it only. Later I shall show its practical application through the forms of power generating apparatus. If I succeed, the world will see machines against which the largest turbo-dynamos of today will be mere playthings.”

In response to questioning, Dr. Tesla said that one invention on which he had been working recently would permit the generation of all kinds of rays of almost unlimited intensities, and would afford a check on whether the present theories of atomic structure are true and workable or merely a fabric of the imagination.

The inventor of the arc lighting system, of the system of alternating current power transmission, the Tesla coil, of a system of wireless communication and of wireless power transmission systems, allowed his thoughts to rove back over the beginning of his career and when he was a small boy on the Austro-Hungarian border. Then he allowed them to look into the future, in which, within the lifetime of the younger generation he is convinced there will be communication among the planets.

“When I was 9 years old,” he related, “I built a turbine in a mountain stream on my father's land and connected it up with bolts to all sorts of machinery. I told my uncle, ‘Some day I'm going to America and I will run a big wheel at Niagara Falls.’ I had read about Niagara Falls and it fascinated me. My uncle didn't take it seriously. ‘You'll never see Niagara Falls,’ he told me.

“But I did come to America, and I did put a big wheel in Niagara Falls.”

Dr. Tesla, at the height of his career, designed the great power system at Niagara, and perhaps no boyhood dream ever was more tremendously filled than his.

The inventor's conviction of many years' standing that there is life on other planets in the solar system and that some day we will communicate with other planets has not lessened. Means of communication will readily be found, he said, and there will be no difficulty in establishing an intelligent exchange of ideas. He indicated that this might be done through some sort of television which would transmit ideas much as moving pictures tell their stories to races of diverse languages.

“I have a sense that we are on the eve of a great revelation,” he said, speaking of the possibility of interplanetary communication. “Whether I will live to see it is a question, but you, as a younger man, will see it. And the news of it will be the greatest sensation in the world's history.” 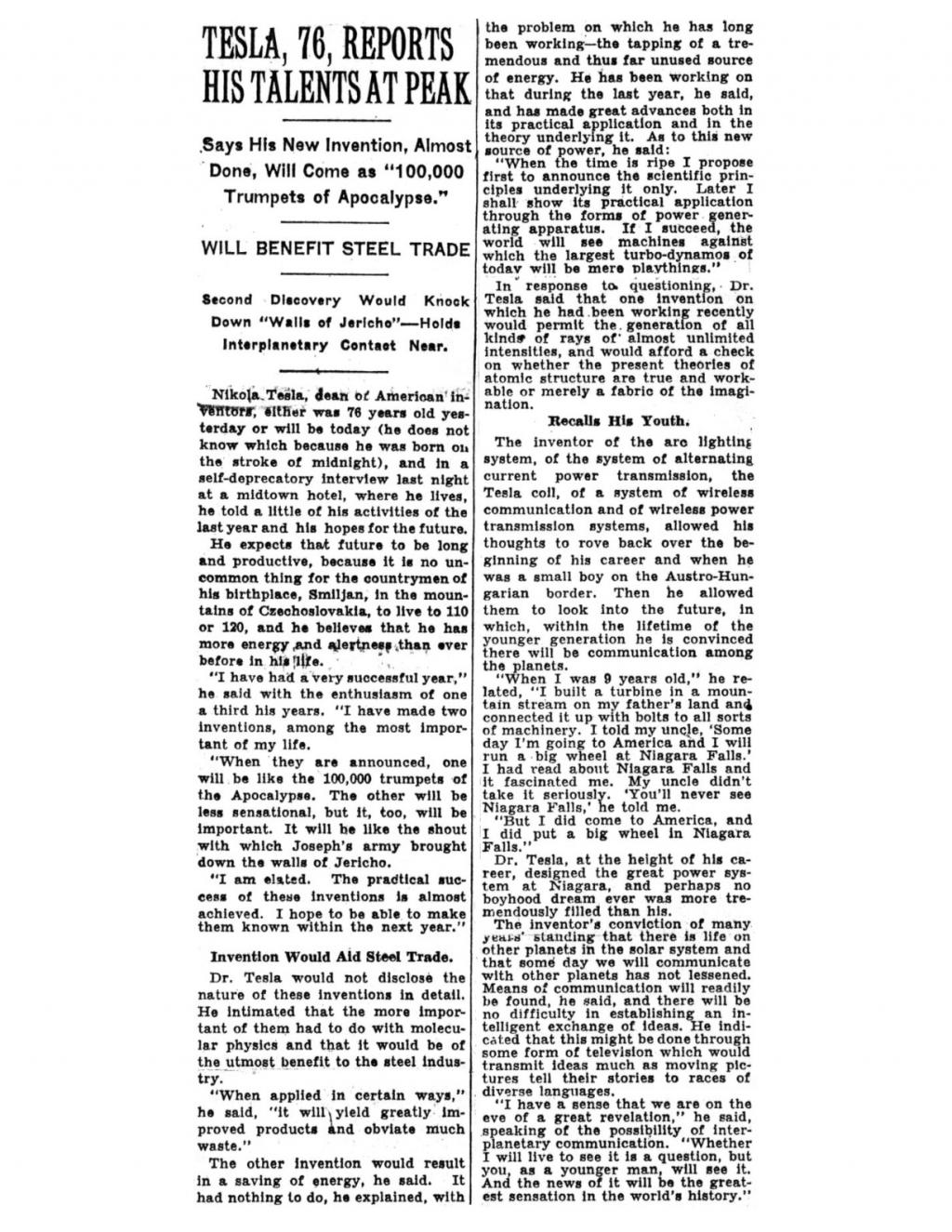